Eric Copeland of the Black Dice and Terrestrial Tones has embarked on a solo career. I was first made aware of this when he emailed me about setting up a show in September in Fayetteville for him. I don’t live there no more, so I pointed him to the indefatigable Amy of the Dinosaur House. So any and all F-Town readers out there, if the shows happens you need to go. Because Eric’s shit is double dope. 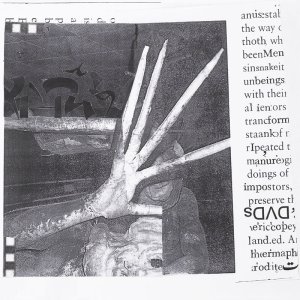 Copeland’s debut album Hermaphrodite is often referred to as being more accessible than Black Dice. Which is true to an extent. But that is due to the sonic palette that he uses here rather than the structure of the songs. Black Dice and Animal Collective have a long history together and have often used each others ideas. Copeland’s use of warped human voices and semi-recognizable instrument sounds often does sounds more like a thornier Animal Collective. But the contextless tones and drones that Black Dice use are here as well. The two tracks I’m posting, “La Booly Boo” and “Spacehead” are the most vocal oriented. “Spacehead” even has something of a traditional song structure.