When I was in high school, a friend of mine was an exchange student from Mongolia named Dashka Yagaan. When he went home, he gave me a mixtape of Mongolian pop that he had brought with him.

A few days ago I was going through some boxes and came across it. I decided to rip it and share it. I don’t know the titles or artists for any of the songs. I tried SoundHound on my iPhone, but no luck. 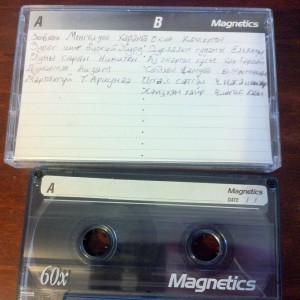 Back in 2009, I made a mixtape. And then it sat on a shelf forgotten until now. I had just picked up some really cool records on record excursion to Flint, Michigan. So I made a tape of tracks from those records mixed with other stuff I had recently acquired. It was pretty good. I titled it Cassettestep for some dumb reason.

While looking for a pencil, I came across the tape today and decided to rip it. I lost the tracklisting, but was able to mostly reconstruct it. Side A is more of dubstep, rap and dance thing. Side B is rock and folk. 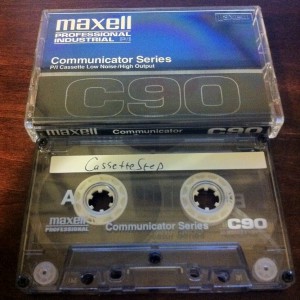 Side B:
1. Maureen Tucker and Jonathan Richman – I’m Sticking With You
2. Prince – I Would Die 4 U (extended version)
3. Kurt Vile – Take Your Time
4. Bruce Springsteen – Born in the U.S.A. (The Freedom Mix)
5. Breathe Owl Breathe – Sabretooth Tiger
6. Neil Young – Cortez the Killer (live in San Francisco, 1978)
7. Joy Division – Atmosphere
8. Harry Nilsson – Me and My Arrow
9. Steely Dan – Green Earrings
10. Sonic Youth – ? (It’s a short bit of live noise, I have no idea what from. I might have tried to put another track on here and ran out of tape.)