Oh, shit. The best book ever has just been released.

Yes, Chronicle Books has released a book of pictures of Van Halen back when they were the kings of universe: 1978-1984. Click the link for a bunch of sample pictures and some funny commentary. I’ll just leave you with this picture. 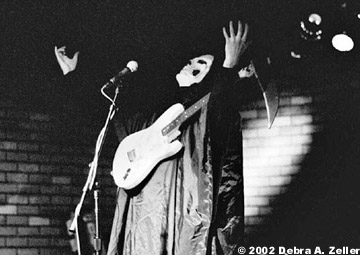 Well, here’s another dope thing I picked up while in the Chi. I saw this book called Wait, You’re Not a Centaur, noticed that it had a short (50 word short) story about Jesus meeting Bolt Thrower, noticed that it had a CD in the back and dropped down my $16. The book is 50 50-word short stories and a ton of awesome sketches. But the CD, by Nate Denver’s “band” Nate Denver’s Neck is what I’m going to talk about. It’s a mix of lo-fi folk, rap and death metal. And if you’re not sold there, I’m not sure if we could ever be friends. I’m posting two tracks. “Mace” is a mission statement of sorts. It’s one of the rappier tracks, as there’s no acoustic guitar. It’s a simple lo-fi beat with Nate doing a soft speak/rap thing, but spitting about “eating dragon hearts and drinking unicorn tears”, his family, personal life, and his penchant for sweets. Plus there’s Public Enemy & Army of Darkness samples. “4 Horsemen” is an ode to Slayer that wonders if they laugh or if they cry or if “their circuits are crossed so they laugh when babies die” and “wonders what they do on Christmas Day”. And then it ends with him playing the song for Slayer and them reacting favorably to it.

Both the book and album are the most wonderful, bizarre and hilarious thing I’ve picked up in a long time. I really encourage everyone to go pick this up. You can get it on Amazon, direct from the publisher La Mano, which is ran by Zak Sally of the band Low. La Mano is distributed by Sub-Pop, so you should also be able to find Wait, You’re Not a Centaur in all finer book and record shops.

If you know me, you know how much I adore the music of Joanna Newsom. When I was in Chicago, I came across a delightful little minicomic/zine called “To the Mouth of the Source” by Grant Reynolds that is a quasi-narrative collection of whimsical, yet somewhat melancholy, illustrations based on lyrics from Joanna Newsom songs.