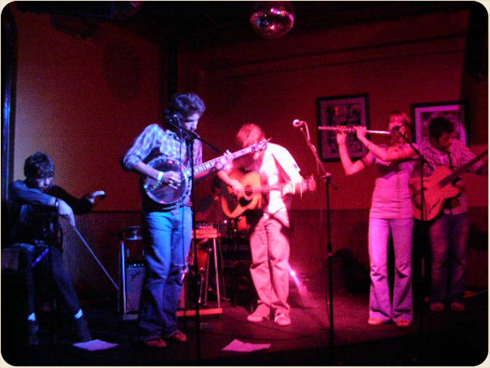 Frontier Ruckus seem to be the best band in the Lansing area. I’ve seen them (or frontman Matt Milia) play several times since I moved up here, and they always impress. Milia sings in that post-Jeff Magnum indie folk style. Despite that, his voice is loaded with power and emotion and the songs he writes have a deeper connection to traditional folk music than what your average indie folk band has.

So far, their only release is the I Am the Water You Are Pumping EP. At 6 songs and 29 minutes, its long for an EP, but all the songs are great. And it comes in awesome packaging.

Buy the I Am the Water You Are Pumping EP

When I moved up to East Lansing and started doing some research on the local music scene one of the names that kept coming up was Chris Bathgate, a folkie from Ann Arbor. I downloaded his 2006 album Throatsleep and was thoroughly impressed. He has a new album out called A Cork Tale Wake, but I haven’t heard that yet. “Creek, Cure, Dawn” is a dark electric folk number that’s somewhere between Bonnie “Prince” Billy and Iron & Wine. “I Know How You Are Going to Die Tonight” is also dark (obviously), but has something of a cabaret feel with jaunty piano, horns, banjo & violin.

He’s going to be playing two shows in my area soon.
Today (!) he is playing MSU’s U-Fest at main lounge of the MSU student union. Also playing are Jon Rajewski, A Story Told, and Tyler James, but I don’t know anything about them.

Now that I’m not doing a radio show anymore, I’ve decided to turn this into an music blog. I’m not going in with any preconceived notions about what form of music blog it will take, I’m just going to post shit that catches my ear and take it from there.

Some facts about myself. The reason I no longer do a radio show is because I have left my home of 7 years, Fayetteville, AR, to go to grad school at Michigan State University in East Lansing, Michigan. I also count Neil Young as one of my top 3 favorite artists of all time (the other two being the Velvet Underground and Can).

So I moved to East Lansing a few days ago. And, after I’d gotten settled in a bit, I decided to check out the local hip record store, Flat Black and Circular. I’d heard good things and it didn’t disappoint. I was looking for some Harry Nilsson records when my eyes caught something on the “New” rack. It was this little number:

A Michigan tribute to Neil Young. I’d only heard of one of the bands on it (and I wasn’t really into them), but I didn’t care. It might very well have been awful, and I still wouldn’t have given a fuck. This was my new home state paying tribute to one of my heroes. It was like the whole state had just given me a welcoming gift and told me that they were happy to have me in the family.

I went home, set up my stereo system and put it on. And I was not disappointed. Every track was at least good, and a few were great. But it was the hand bound liner notes that really did it for me. The bands and artists told their Neil Young stories (every Neil Young fan has a Neil Young story). But the highlight was the story of how the comp came together, specifically this bit from the compiler John Krohn: “The second reason for making this record is to show the whole world how kick-ass Michigan bands are. Fuck New York, Portland, and Chicago. I’ve been to them all many times, and they’re cool enough. But I’m not trading Michigan for anything. Ask me about Michigan, I’d love to tell you.” Well, John, after listening to the amazing compilation you put together, I feel like you’ve already told me.

Here’s an mp3 of my favorite track off the album, “Southern Man” by the Casionauts. They have this track streaming from their myspace, but this mp3 is a vinyl rip. It’s not the best vinyl rip out there, as my laptop is kinda sketchy, but if it sounded too good, you might not buy the album. And speaking of buying the album, you should do that. It’s limited to 500 copies and they are on 180 gram vinyl and are in a nice gatefold cover. I bought mine at a store, but you should probably follow these directions and email lpvinyl@gmail.com.

(expired)
sample mp3 with selections from all tracks